A Clear And Bold Heading 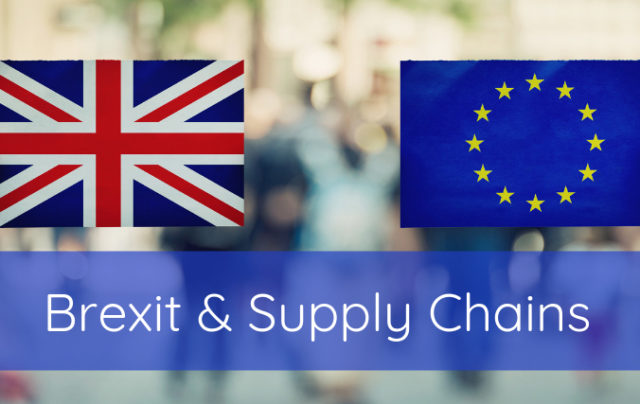 The issue of Brexit has taken over the airwaves and is very much top of mind — especially for leaders of companies within the UK and companies that provide products or services to the UK. The 31st of October is D-day, and the UK will be leaving the EU, that is definite...but the details are still unsettled. Whether it will be a ‘no deal,’ “hard," or "soft” Brexit, there will be an impact on business.

Trade between the UK and the EU is currently based on the free movement of labor, goods, and services. These trade agreements will most likely look a lot different, so in order to future-proof your supply chain business, you need to understand the issues at hand.

Of enormous concern is what a Brexit “no deal” scenario would have. "No deal” would mean Britain would crash out of the EU and the Standard International trading rules would then apply. There is concern that this could cause significant delays at UK borders, which could bring about food and medical supply shortages, and that possibility means many businesses are finding it necessary to stockpile goods and resources “just in case.” That means working capital is being funneled into inventories, and additional storage space is required at increasing expense.

The UK military, as part of a more extensive contingency plan, has forward-purchased a range of commodities to allow them to continue to function in the event of a ‘no deal’ and the inevitable disruption of the supply chain. In addition, UK warehouses are now ‘full,’ which raises doubts about the ability of British companies to stockpile goods ahead of a potential ‘no-deal’ Brexit.

If a “hard" Brexit is applied, this would mean a definitive split from EU powers. Currently, Britain’s EU membership includes loads of extras — not only being part of the EU political system but also part of things like the Single Market, Customs Union, and the European Court of Justice. With a harder Brexit, it becomes more likely that Britain would leave more of these systems and institutions, allowing the government to establish its own rules, regulations, and trade deals with other countries.

Depending on the type of business you have in the UK, the impact of a “hard” Brexit would vary — it could be useful for businesses that only trade in Britain, as imported goods would get hit by new tariffs and extra border inspections, inflating the costs of imports. On the other hand, if your business relies on goods from outside countries to manufacture your end product, then you will be the one to have to take the hit on the additional tariffs and border inspections.

A “soft” Brexit would see much more of an alignment between the UK and the EU — and if it’s to be a true “soft” Brexit, the UK could stay in the Single Market and the Customs Union. Local UK companies would then see more competitors, and companies that rely on imported parts and goods would benefit, since there would now be no additional tariffs on imported goods. A “soft” Brexit would also have the UK missing out on developing trade agreements on its own with countries like the USA, China, and India.

Whatever the scenario, there is currently insufficient storage from the sudden influx of goods.  A ‘no deal’ Brexit would require companies to continue to increase their orders to accommodate the ongoing border delays. Renting storage space because you have exhausted your capacity will come at a premium price due to the high demand.  This will leave you with the choice to pay the premium or to modify your facilities to accommodate more storage — i.e., investing in additional shelving, racking, and so on.

In conclusion, stockpiling may have been a good decision at the time but if you look at implementing an Inventory Management tool, you can place “early” orders based on actual data that has been calculated using mathematical formulas. This will, for example, detect that the estimated lead time is greater than the stated lead time, allowing you to account for the extra safety stock needed to buffer that supply risk.

Craig is President of NETSTOCK USA and CIO for the Group. In 2011 Craig joined NETSTOCK and began his journey building the business from the ground up. In both roles, he is focused on the NETSTOCK customers and empowering his team in the US to make sure our customers are successful. Internally, Craig ensures we have effective systems and processes in place, to deliver great service to our customers.

How to minimize damaged, spoiled and expired inventory

END_OF_DOCUMENT_TOKEN_TO_BE_REPLACED

The major causes of stock-outs [Updated]

The advantages of an effective ABC analysis